A Tribute to Anthony A. Nasso 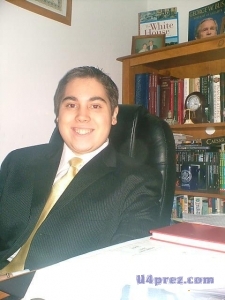 He held a strong desire to enter public service since his days in the 2nd grade.

As an 18 years old high school Senior in Middletown, New Jersey. He was elected class President in his freshman, sophomore, and senior years, and also served on his schools mock trial team as a defense attorney for two years. He was selected as a delegate to the American Legion Boys State Program, and was elected to the State Legislature by his fellow delegates. Anthony also participated in many leadership summits in Washington D.C. and he plans to attend Seton Hall University and study political science and eventually law.

For those of us who were blessed with the chance to discuss Tony's dreams, goals and political views, we were impressed by his strength of conviction and enamored by his gentle, humorous and calming personality.

He touched us and he left us with nothing but a sense of optimisism and goodwill to all.

Tony once wrote this about himself:

"I like hanging out with my friends, going to parties, and having Sunday dinner with my family. What Italian doesnt? My friends say I'm funny so thats cool."

Tony did not not mention his hard work. He did not pat himself on the back but he should have. he led many of his peers and toaught many twice his age much. Tony's understated self-description focussed not on himself but on those around him...his friends and his family. He knew what was important and he made them proirities.

Now,, taken too soon and and stunning too many, we make Anthony Nasso's enduring legacy a proirity.

may we never lose sight of what is important and may we never take for granted those people so precious to us.