A Tribute to Gerald R. Ford 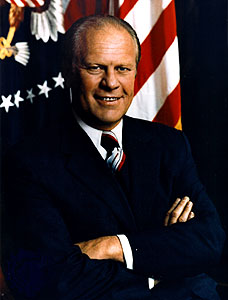 1 Person
7/14/1913
12/26/2006
93
108
en.wikipedia.org/wiki/Gerald_...
Gerald Rudolph Ford, Jr. (July 14, 1913  December 26, 2006[1])was the 38th President (19741977) and 40th Vice President (19731974) of the United States. He was the first person appointed to the Vice-Presidency under the terms of the 25th Amendment; and, upon succession to the presidency, became the only person to hold that office without having been elected either President or Vice-President. Prior to becoming Vice President, he served for over eight years as the Republican Minority Leader of the House of Representatives. Ford was the longest-lived president.

The Ford administration saw the withdrawal of American forces from Vietnam, the execution of the Helsinki Accords, and the continuing specter of inflation and recession. Faced with an overwhelmingly Democratic majority in Congress, the administration was hampered in its ability to pass major legislation, and Ford's vetoes were frequently overridden. Ford came under intense criticism for granting a pre-emptive pardon to President Richard Nixon for his role in the Watergate scandal, and was subsequently defeated narrowly by Democrat Jimmy Carter in the 1976 presidential election.
There are currently no announcements for Gerald Ford's Warm Tribute Online Memorial yet.
There are currently no post entries for Gerald Ford's Warm Tribute Online Memorial yet.
© Copyright 2006-2022 Warm Tribute. All Rights Reserved. Terms and Conditions.
home about create a tribute online tributes the blog articles contact log in