A Tribute to Michael Joseph Eeckhout 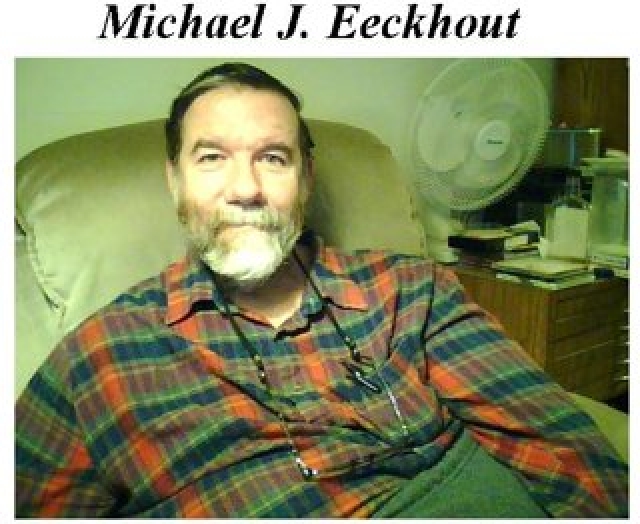 Michael is my brother.  I don't think the fact that he's gone changes that.  I can't say he "was" my brother because no matter where he is, he is still my brother.  I didn't see him daily, or even very often, but I miss him.  I can see him in my mind's eye, and sometimes I can hear the cadence of his voice, like when he left me a voice mail message -- "this is Michael Eeckhout" as if I might not know who it was.  It always made me laugh.  He was an unusual man.  Very quiet, yet very intense.  I'm pleased to know how much he was appreciated by the people he knew.  They really liked him an awful lot, which makes me happy.  I am especially sad about the hole his passing leaves in the lives of our parents.  He was very special and important to them.  No matter how hard the rest of us try, nothing can fill that hole.  I wish they didn't have to feel that pain.

One of my favorite memories is the year Mike and I attended college together.  He's 4 years younger than I am, so we didn't do a lot together, or share the same friends.  I didn't get started in college until my 20s, a few years later than my peers.  I only had a year under my belt when Mike got out of the Air Force and decided he wanted to go to college, too.  I was able to show him how to get started and we took a couple of classes together.  We both enjoyed the physics class.  He had to help me with calculus.  After that first year, he had learned the ropes and went on to get his degree in computer science.  I had to cut back to part-time, so we didn't spend time together on campus after his first year, but I was glad that we had that time together.  I appreciated that we were both adults and not just bickering siblings.

We would like to pay tribute to our late brother Michael J Eeckhout. As you read ahead, you may discover the large effect he has had upon us.

Son of Joseph Maurice Eeckhout and Christina Joyce(Patterson)Eeckhout, Michael Joseph Eeckhout was born on November 25, 1953.
He started his life adventure at #332 Leonard Road, Greece, New York along with his older sisters Kathleen and Maureen.  In 1959, the family moved into a brand new house at 43 Colby Street, Spencerport. While at 43 Colby Street, Mike also gained a sister named Elizabeth in 1961 and brother John in 1963.

Michael led a very active life, making lots of friends like Alan Buckner 45 Colby Street and Bart Schillaci 28 Colby Street. He led the typical life building tree forts in the back woods and making go-carts for the front field. He even broke his leg while downhill sledding!
In highschool, He and his friend Alan purchased two old VolksWagon Beatle cars. They enjoyed doing laps around the front field just across the street. At one point, the VW car collected so much hay, it caught fire within the rear engine compartment!!
Mike was a technical "gadget" guy and chose to attend the Edison Tech High School in Rochester.
He once built a home made telephone between his bedroom and his best friend Alan's bedroom.
The phone came complete with a buzzer and a 3 pound telephone handset. He made many other "cool" gadgets around the house. He even assembled an old Heathkit CB Radio Kit.

Michael graduated from Edison Tech High School in 1971, and with the vietnam draft soon approaching, he decided to enlist into the Air Force. He became a communications specialist and was stationed in Langerkopf Germany from 1973-1976 where he achived the rank of Sergeant. He was in charge of maintaining high security communications throughout the area. A difficult task during the "Cold War".

When Mike returned in 1976, he immediately attended SUNY Brockport college, where he eventually earned a Bachelors degree in Science. Mike also got a job with Radio Shack and met his close friend Mike Johnson.
CB radio was very popular during this time, and Mike pushed the hobby to great lengths.
He assembled a "Four Element Quad" CB antenna and mounted it upon a 20ft tall tripod, this enabled him to communicate across the entire country. Eventually the homestead became an "Antenna Farm" between all the police scanners/CB antennas!
It wasn't until 1981 when Michael became an Amateur Radio Operator. First earning the  license "N2BPC" then the advanced "KC2LC", then finally the extra class license "NO2Z".
Michael had a special gift of education & encouragement. He shared his interest with great enthusiasm, and the entire family followed his lead. Mother Christina became a Ham Radio operator with the call "N2DEG".  Father Joseph became "N2DRJ" and baby brother John became "N2DRG".

Computers were unavoidable during the late 1980's, and Michael took to the task with vigor.
One of his first computers was the Radio Shack TRS-80. Michael would show the family how to insert the cassette tape into the computer and upload a program. He learned the computer language called "BASIC" and began programming.
As the years passed through the 1990s, Michael learned about DOS, Microsoft Windows 3.1, Windows 95, 98, and NT4.
During this time, Michael was employed by Kodak as a "Computer Systems Designer".  He designed and troubleshoot Kodak's film processing & supply inventory.
By the year 2000, he had learned Linux, HTML and PERL computer languages. Much he had taught himself!!!


Michael had a great love for Science Fiction. The 2001 Space Odessy was a favorite movie, along with the TV show Star Trek.  Mike watched and recorded every Star Trek program. Even after the the original series ended, Mike eventually recorded Star Trek-The Next Generation, Deep Space Nine and Voyager.

We would be remiss if we did not mention his love for Cheryl. Mike had met Cheryl as "N2KFH" in the Ham Radio world.
They soon got married and lived at 43 Pine Briar in Greece New York, however they had no children together.
Until Michael's untimely death on tuesday February 26, 2008, Michael feelings for Cheryl was very powerful.


In summary, Mike was a large man in both personality and stature.
He would always help anyone in need with the words "No Biggie!"
Friends would describe him as a "Gentle Giant".

Michael will not be forgotten.